Here are the artists delivering FULL CDs in this mailing: 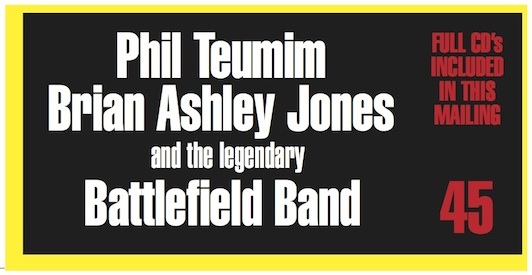 Hans is one of the premier finger picking Delta inspired bluesmen to be found anywhere. He’s the real deal, simply a roots-blues master who is as good as it gets on every level. A killer picker with a magical voice and a storyteller of the highest order.

Beautiful, rootsy, acoustic folk that draws on Jennifer’s Americana influences but remains undeniably English in it’s story-telling. This acclaimed UK songwriter wrote many of the songs her 3rd album on the lever harp. Her finest work to date.

Song:  Take Me To Forever

With Nashville ace Will Kimbrough producing, this Denver songwriter, now based in Nashville, pays homage to one his songwriting heroes. Recorded in Muscle Shoals, his new album “Simplify,” is a poetic call to slow down and step back.

Song:  The Night John Hartford Opened for Us

Celebrating 25 years together, this East Kentucky folk trio are known for their divinely stirring harmonies. This original written by Roberta Schultz, who is also appearing on the sampler as solo artist, is based on a true story. The album is full of heart, laughter and mountain soul.

Song:  Backwards and Inside Out

This songwriter and poet from Kentucky performs in the folk trio Raison D’Eetre also featured on this sampler. This cut from her first solo CD is a loving tribute to her Dad written shortly after he passed away.

Song:  Since I was Begotten

Marla Fibish and Bruce Victor are master musicians that make up this duo. Their latest project is poetry-set-to-music, beautifully recorded and masterfully played. This piece features the poetry of Stephen Vincent Benét.

Her smoky voice, blues roots and clever songwriting shows why she’s an artist to watch on the Americana scene. Her third album was produced by Reverend Peyton and it’s a unique blend of heart and grit. Contact now for the release.

CD:  That’s What I Love About Christmas

We serviced this beautiful acoustic roots holiday album last year and this track is a great reminder to have it ready for your holiday playlist. The album was recently nominated for two IMEA awards. A great seasonal song!

Song:  The Other Side of Life

Sharon and co-writer Michael Shellard were prairie troubadours from Canada’s West. Since then, Sharon signed with a major in Nashville and Michael played in the legendary One Horse Band. The two re-unite their creative sparks here.

This is an inspirational tribute to Sharon’s spiritual teacher, a wistful yearning for the kind of love that blossoms majestically in the wilderness. Strings beautifully done by George Bradfute and dobro by Chas Williams. It’s stunning.

CD:  All Over the Map

This tune celebrates Phil’s love affair for the songs of yesterday in a very heartfelt way. The CD looks at the world with a bit of nostalgia, a dose of humor, and an eye on the future. It’s included in this mailing. This is a great album!

Former Nitty Gritty Dirt Band member’s haunting song with searing slide guitar about communication in relationships. From his new album, where old school tradition meets modern sound layering all bringing out the best in his melodies.

Known for her expressive and insightful lyrics, here’s a catchy original from her 7th album. Bar has been an ASCAP Special Award winner for 12 years and worked with Phoebe Snow, Beth Nielsen-Chapman, Levon and Amy Helm, and others.

Song:  Death Don’t Have No Mercy

If you love the authentic down-home, delta-style blues of Robert Johnson, Big Bill Broonzy, Bessie Smith, then check out this acoustic blues duo from California. This take on the Rev. Gary Davis is filled with great fingerpicking and gritty vocals.

Artist:  Mike Jorgensen and the Posse

Song:  Sittin’ in the Saddle

CD:  Dreams of a Cowboy

This band is on a mission to bring back songs and melodies that can be sung walking down the street or on a long walk in the woods. Acoustic instruments with traditional production and a cowboy swagger. The album is fun listen.

Song:  You Are The Song

Hailing from Perth, Western Australia, David has traveled far and wide to get his music heard while collecting many award nominations. His most recent album is his first singer/songwriter album. Strong songwriting with melodic guitar hooks.